The Future of DevOps – 10 Thought Leaders Weigh In

Companies must delivery applications faster than ever in order to survive in this digital era.  The adoption of DevOps has changed the game of software delivery.  However, with all its benefits, comes new unforeseen challenges.   We asked 10 DevOps thought leaders what they think is the biggest obstacle facing DevOps today, and what they believe lies ahead for the future for DevOps.

Question:  ‘What is the biggest bottleneck in DevOps today? Where is DevOps going next?’ 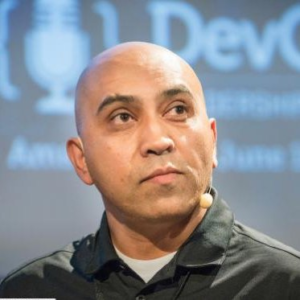 We still see the inability to bridge functional gaps within organizations as a big bottleneck. Typical example of that is the Dev to DBA bottleneck.

To get changes applied to a database, enterprises still rely solely on their DBA’s to make even the most minute changes. This is an excellent example of a bottleneck. A prime example of how this bottleneck can be alleviated by using tools like Daticals Liquibase and Release Orchestration tools like XL Release.

The next big thing in DevOps is intelligence. We have heard the term “Big Data” And “DevOps Intelligence” and that’s where we are headed now. With the clutter of so many DevOps tools in the market and the need to gather the metrics that comes out of each one of these tools, the presentation and dissection of this information is ultimately important for enterprises. In analytics, the biggest bottleneck in DevOps is applying best practices and automation to database schemas.  Database schemas change with different requirements from business stakeholders much faster than in previous eras.  Data-driven organizations are using new data sources such as IoT sensors, mobile and online apps, and machine-generated sources such as web and application logs to increase competitive advantage.  A static (at best) or “calcified” (at worst) set of schemas will prevent data-driven organizations from capitalizing on business opportunities and new revenues.  The ability to effectively manage this pace of schema change using automation and best practices is where DevOps can provide the best value. The biggest bottleneck in DevOps today isn’t a technical problem but a sociopolitical one.  Typically, a forward thinking development or operations group will lead the charge in a DevOps transformation for the well-documented benefits of a smoother, faster & more frequent release process.  When the more conservative and risk averse groups in the cross-functional team are brought in, that value proposition sounds downright scary.  The teams for whom speed is not the first priority (usually the security or DBA groups) can dramatically slow things down as they get comfortable with a world that seems upside down to them.  That’s why early involvement and the establishment of widespread understanding between all team members is crucial to success.  You must make sure that all team members’ are having their needs met and realizing a net benefit from the transformation.

As DevOps gains widespread adoption and successful patterns for establishing healthy teams that work together towards a common goal are established, the next step will be leveraging development and release data for analytics or even machine learning to fuel constant process improvement.  When done right, DevOps is going to yield an unprecedented amount of centralized data about our IT practices.  When we begin correlating event and performance data across entire organizations we’ll begin to discover that class of problem that take us from our current “good enough” state to stability and performance gains that really increase our competitive edge. It is very hard to deny that DevOps has had a profound impact on the IT industry. While so many companies have already started to use DevOps or planning to use DevOps and related methodologies soon, there is only a small percentage of companies that are “end to end DevOps”. This means there is still tremendous opportunity in bringing DevOps to market. But what is holding DevOps back? Where is it going next? Here are my thoughts:

What is holding DevOps back and what is the biggest bottleneck today? I think the answer is a lack of knowledge or process on how to initiate your DevOps journey. Whether it is getting your executive team behind the transformation, the will to really change the culture of your organization or being able to point to objective metrics that show its advantages, many organizations who would seem to be ideal candidates to adopt DevOps hit a wall right there.

For organizations who do try to adopt DevOps, I think the biggest bottlenecks are around testing and security. As much as we talk about automated, continuous testing, only a small percentage of our tests are being done in an automated manner. Completing testing is holding us back. Secondly, security. Shifting security left, getting security to sign off prior to release is still a bottleneck. The reasons for this are many but much of it is cultural, rather than tool related.

Where is DevOps going next? I think DevOps will continue to transform the IT landscape. Where it is going is beyond Dev and Ops. I think the integration of security is under way. It is not going as fast as we would like but the momentum is building. I think the next area we need to bring DevOps too is the DBA. They have also been largely left out of the DevOps adoption cycle. Data and databases are too integral to what we are doing in IT to not be part of the DevOps adoption chain. The DevOps concept was first conceived in industrial settings (such as auto manufacturing), as a way to coordinate the work of designers with that of the production teams, so that products get out the door in a reasonable amount of time, with reasonable levels of quality. The challenge for DevOps within information technology settings is its relative murkiness compared to the straightforwardness of production floors.

DevOps reflects too much industrial-era, everyone-stay-within-the-lines thinking. There often isn’t such a clear-cut distinction between “designers” (or developers) and operations people — they are increasingly one in the same, and these roles tend to shift much of the time. In addition, many tasks and functions are now available through the cloud or APIs, and either are developed elsewhere, operated elsewhere, or both of the above. Products are even developed collaboratively with outside innovators, through platforms, injecting startup ideas, or even various forms of crowdsourcing. The DevOps concept may even be outdated for what takes place within many information-driven enterprises. I think the term “Continuous Improvement” would better describe today’s need for collaborative product develop-and-release, as it acknowledges the ever-changing roles of information workers and their co-innovators, while baking in a commitment to rapid delivery of products with ever-improving quality. There are many bottlenecks slowing ubiquitous adoption of DevOps, from culture to market confusion, to lack of expertise.  However asked to pick one I would say it is lack of clarity on how to apply modern continuous delivery and DevOps practices can be applied to legacy technologies and architectures, which slows move beyond single team “Greenfield” implementations of DevOps to the transformation of an entire organization.

But where there is a will, there is a way. With the will, an understanding of the existing technologies, and a grasp modern tools and practices you can apply DevOps practices practically anywhere.

Mainstream – Over time DevOps practices will just become “the way things are done” and in that process, the DevOps principles will extend beyond IT and be embraced as part of the business overall strategy…even in non-technology industries

Cloud – Companies implementing DevOps will wholly embrace cloud platforms as the primary solution for hosting delivery tools as well as providing consistent, on-demand environments from development to production. Cloud technologies will be seen as necessary to enabling the speed, stability, and repeatability demanded by DevOps. It should be no surprise that I see security as the biggest roadblock in DevOps. What is the point in getting the path from development to operations faster and doing fast deploys, if we are having to bypass security tests or putting it on an occasional basis (quarterly?) because it takes too long to do security? Even from the general DevOps perspectives, proper, effective, and thorough testing remains a challenge. A lot of it is technology—which is why plugins for Jenkins and other CI platforms help—but it is also process. If the developers aren’t reminded regularly, and held accountable, to make sure they never check in broken code, then the deployments will have difficulties. Security testing, by default, take a longer time than other tests. But there are ways to include security tests as part of the builds, such as checking the code for how it handles untrusted inputs and scanning the version numbers for libraries and other third-party components.

DevOps succeeds because it automates a lot of different tasks, and that is what is going to solve the security issues. Fuzz testing and penetration testing can be automated to some extent. Not everything has to be tested during the builds in development—more time-consuming and difficult tests (such as static code analysis and dynamic analysis) can be conducted during QA—the difference is that if other security tests are conducted earlier, a lot of the more “basic” issues are flagged and fixed before reaching QA.
As developers and operations get more comfortable working together to release better software faster, they are looking for other areas to improve. Developing safer software is the logical next step.” One of our Datical customers, an SVP at a major bank, said, “I’ve done DevOps. I’ve done Agile. Now, I’ve solved the bottleneck problem with database changes. This is the last mile.” Database change is THE biggest bottleneck in DevOps today and companies need to fix it NOW. Of course, this will solve the immediate problem of providing full stack automation for your application changes. But, there is a storm coming for corporate IT and it’s called “Microservices”.

The philosophy behind Microservices, besides the architecture of 12 Factor Applications, is “You build it; you run it.” That is in direct opposition of how we manage our application delivery today. Using SOX compliance as a reason, most companies separate roles into three types: the change requestor, the change implementer, the change deployer. Because of that, we’re created fiefdoms of control that need to be eliminated to speed our digital transformation. If you don’t provide DevOps for the database and distribute the responsibility for change authorship and deployment to the dev teams, your competitors will pass you by. The reason why they will beat you is that they are doing it already.

The biggest obstacle for effective DevOps these days is alignment with database changes. Unless organizations automate necessary database changes, there will be hiccups and worse with their development and operations environments. The biggest bottleneck in DevOps today is people in the organization not willing to change or not being fully committed to the change. You must change to produce value and velocity. If you don’t change, you’ll lose people and be replaced by your competitors who embraced change more readily than you did to develop quality code more quickly.

The greatest opportunities for the future of DevOps are: 1) continued growth of the cloud and the tools provided that facilitate automation; 2) containers; and, 3) company-wide collaboration. There’s a healthy symbiosis between DevOps and the Cloud. As AWS, Azure, GCP, and Red Hat grow, DevOps will grow exponentially.”

As indicated from our experts above, we see that there are still a lot of challenges when it comes to DevOps, but all in all there is no denying its value.  Speed and security seem to be the biggest concerns throughout the answers above, and the database seems to be the most common bottleneck to the process.

Whether you have an established DevOps culture, or are just beginning on the journey, here are 4 DevOps tools you can’t live without.